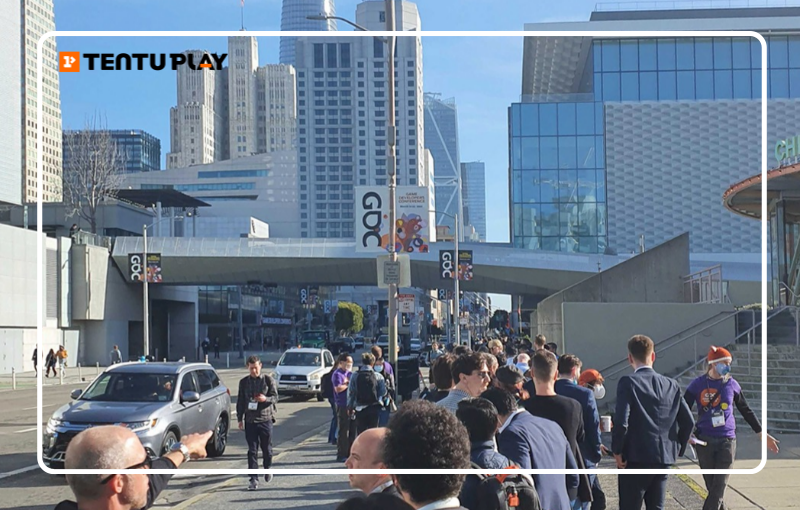 The sessions took place in various formats, from lectures to panel discussions and workshops. Major tech companies made announcements of new products, while industry experts shared businesses cases, research projects, and even sounds and art. This year, a considerable number of sessions covered NFT and P2E.

I attended workshops on the first day from 10 a.m. to 6 p.m. I will review some of the fun and interesting sessions in the last post of this GDC series.

Booths are what add to the festivities of any event. The diamond partners of this year’s GDC included AWS, Intel, Meta, Microsoft, Unity, and WEMADE. The first booth I saw while riding down on the escalator was WEMADE, which came under the spotlight in GDC 2022. They enjoyed a full session in their first presentation, and there was quite a long queue waiting to get in. I have high hopes for their gaming platform WEMIX. Unity unveiled a new sample game, and many other companies presented technologies supporting web 3.0 games.

Also worth mentioning is the variety of fun independent games. We had the opportunity to actually play the games, and cast our votes for nominees of the Independent Games Festival (IGF). 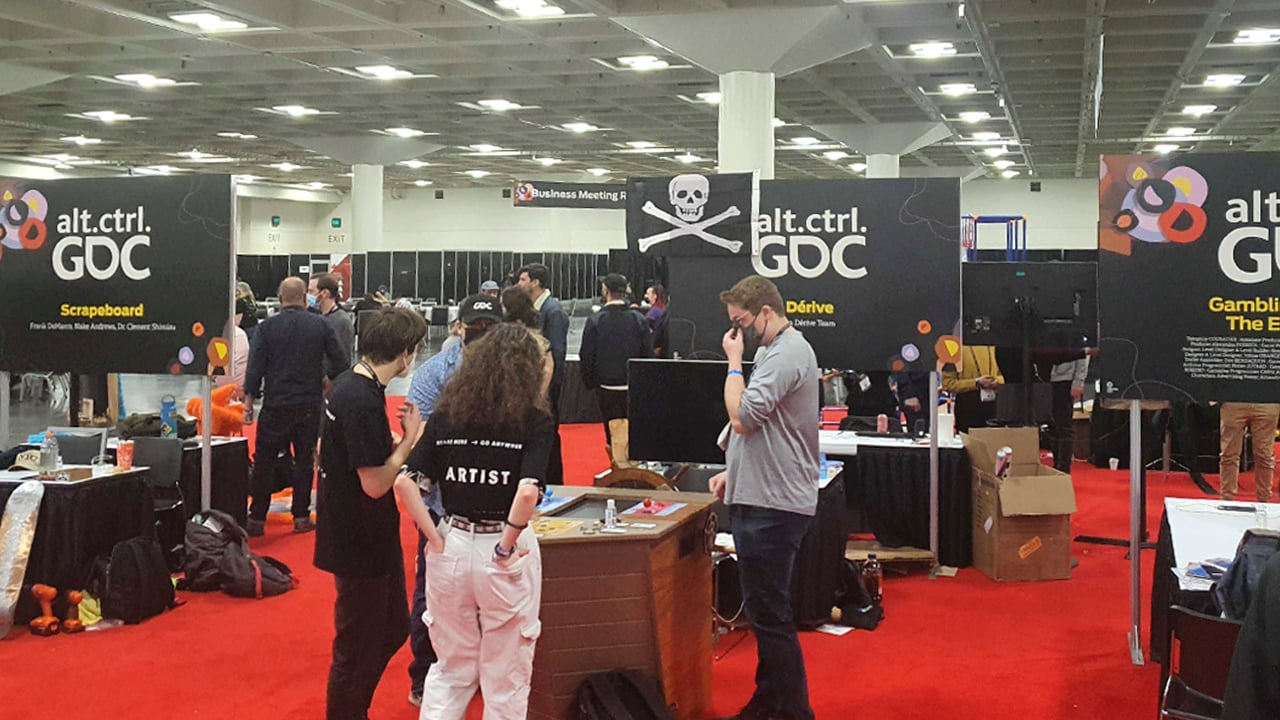 One of the most memorable sections was ALT.CTRL.GDC, which showcased many interesting games played using new game consoles.

Tilt Five presented an AR system for holographic tabletop gaming. I put on AR glasses and played games using a controller that looked like a candle lighter. It opened up a whole new world for me. I would like to see it become more widespread, and to try it on games to be released by TentuPlay.

At the GDC Pitch from March 23 to 24, independent game companies attending GDC Play as exhibitors had the opportunity to pitch their games. They were able to introduce their games to publishers and general attendees, and received feedback from judges. The companies declared as the Best Pitch won tickets to next year’s GDC. The Best Pitch was Stardust’s Grimoire Groves on Day 1, and Tandemi’s Begone Beast on Day 2.

Among the highlights of the conference were the IGF Awards and GDC Awards.

IGF stands for Independent Games Festival, and GDC is short for Game Developers Choice. Both awards ceremonies fell on March 23, the third day of GDC 2022. IGF had a separate category called Best Student Game for games created by students. The other categories were Excellence in Design, Excellence in Narrative, Excellence in Visual Art, and Nuovo Award, which recognizes games that are experimental and innovative. GDCA selected games that performed well in 2021, and awards were presented in categories such as Game of the Year, Best Audio, Best Debut, and Best Design.

A point to note is that Inscryption and Unpacking were nominees in various categories at this year’s awards. Inscryption won four awards in IGF (Excellence in D, Aesignudio, Narrative, Seumas Mcnally Grand Prize), and was the Game of the Year in GDCA. It is the first game ever to win awards in both IFG and GDCA. I cannot wait to play it when I am back in Korea.

On the last day, the GDC 2022 Mixer + After Party was held at Temple Nightclub, a famous nightclub in San Francisco. The DJs at the party were all developers working in game companies. 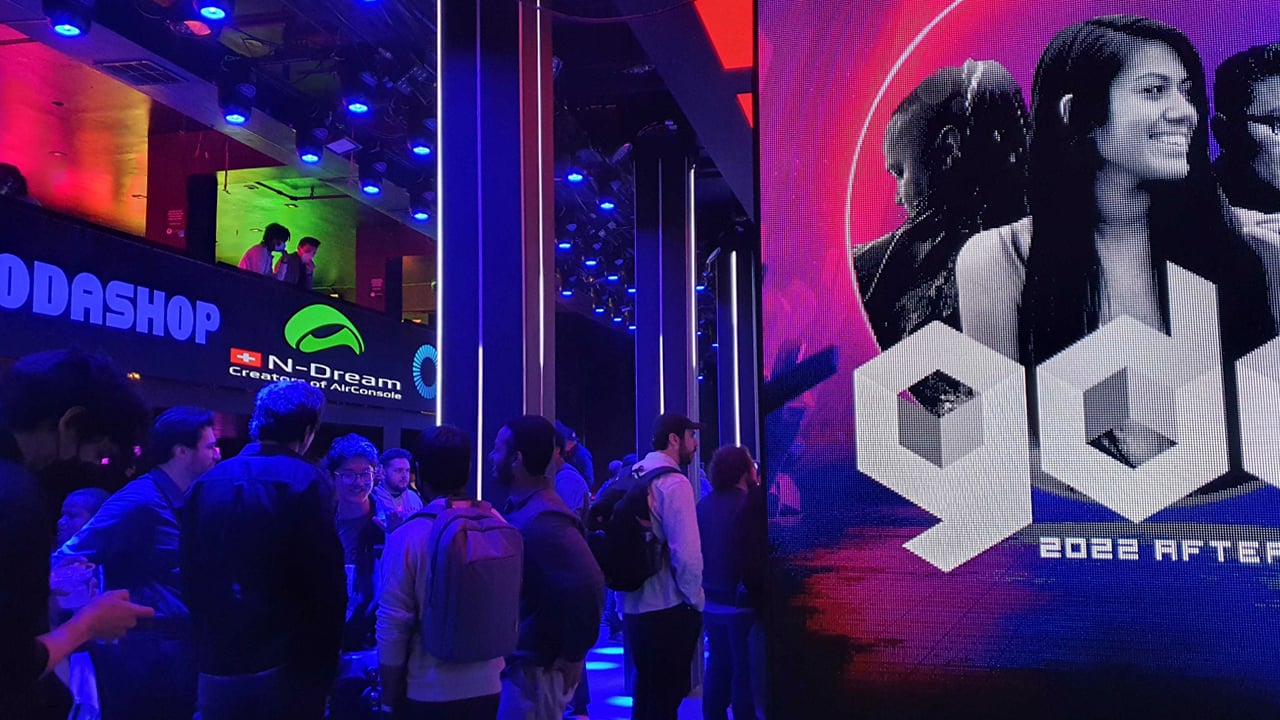 The lounge looked similar to the Expo, with companies giving out their pamphlets and souvenirs. Some came up to the main stage to promote their products, but I could not hear them over the music. Everyone did their best to connect and network despite the noisy environment, and we did the same to promote TentuPlay’s upcoming games.

As expected of a event in San Francisco, GDC recognized the importance of diversity, and gave credit to the efforts of minorities. There were all-gender restrooms throughout Moscone Center, making the venue more accessible to people of any gender. The Ambassaddor Award of GDCA 2022 was given to Steven Spohn. As the co-founder of The AbleGamers Foundation, Steven Spohn has improved game accessibility for disabled players. In his acceptance speech, he said, “Do you know how many times I have been told it’s impossible? You won’t live long enough to see the end of college. You’re never gonna find love. You’ll never make people care about game accessibility. I am here to tell you that not everything is impossible.” You can watch his full speech in the link below.

From the bottom of my heart, thank you. ❤️ pic.twitter.com/H3Cd3Lod5W

GDC 2022 was of a smaller scale compared to the same event in 2019. It had shrunk to about one-third, and Epic Games did not set up a booth. Regardless, I enjoyed meeting people offline at the in-person conference.

TentuPlay gave presentations in virtual sessions of GDC in 2020 and 2021. We were looking forward to the physical conference in 2020, and were disappointed to lose the chance when it was postponed. Getting to see in person the game developers we had interacted with online felt like meeting celebrities. We were also pleased to forge new ties.

We will be attending next year’s GDC with games of our own. Do look forward to it!