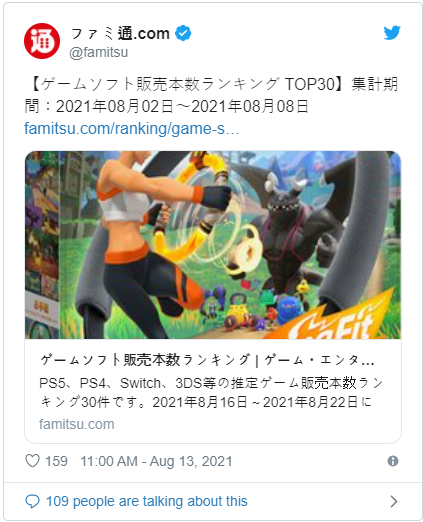 Every week, Famitsu releases a list of top 30 games in sales, and for the first week of August, all 30 games were for the Nintendo Switch. Since Famitsu started collecting data for all platforms in November 1988, rather than the original list only being of data for the Famicom, more commonly known as the NES in the west, this is the first time a single platform has dominated the charts. The top of the chart is Minecraft for Nintendo Switch, 2nd place is the Legend of Zelda Skyward Sword remake.

According to app data collection company Sensor Tower, in July of 2021 PUBG Mobile raised about 300 million USD in revenue, reaching the top of the revenue charts for the month. Of the revenue raised, 68,4% came from China, 6.7% came from the US, and 6% came from Turkey. PUBG Mobile was banned from India last year, but last month PUBG Mobile India was released, amassing over 34 million downloads within the span of 10 days.

The runner up to PUBG mobile was Honor of the King, a game which had topped the charts for the last 4 months, at 231.2 million USD. This is about 40 million USD less than the previous month, the reason for this drop in revenue being the Chinese Government imposing playing time limits on games. Considering that 94.7% of revenue from Honor of the King comes from China, it was much more heavily impacted than PUBG Mobile, which despite a majority of its revenue coming from China has a more international user base, and is thus less reliant on revenue from the Chinese market.

The 3rd, 4th, and 5th names on the list were Genshin Impact, Poketmon Go, and Roblox, respectively. 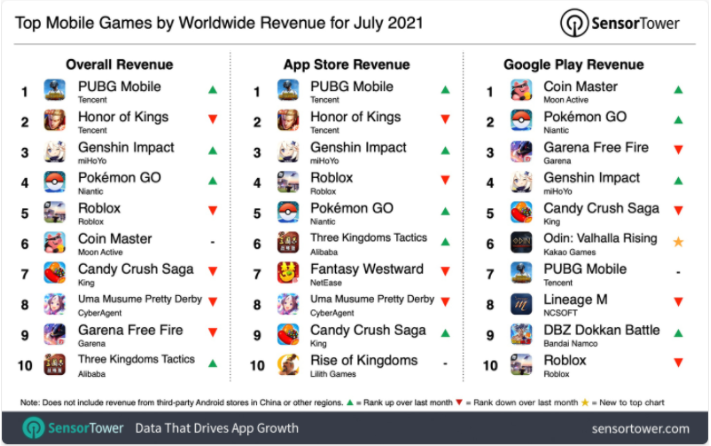 On August 16th, Roblox announced that they had acquired the online communication platform Guilded. Guilded is a platform which allows for online chatting and voice chatting, similar to the larger Discord. Last year, Discord has moved away from a gamer-centered market into a more general market, leaving room for a platform to enter into the market and cater specifically to gamers, which Guilded did. While the acquisition has occurred, Roblox has announced that it plans to allow Guilded to operate independently. It will be interesting to keep an eye out on Roblox, a rising star in the Metaverse designer world, and see how they utilize Guilded to expand their business.

A survey showed that 68% of gamers have experienced insults, discrimination, or toxicity over voice chat while 67% of users have reported that when experiencing such toxicity that it had led to the to stop playing a game.

Felix Thé, the VP of product management at Unity stated that by providing developers with tools to detect toxicity within voice chats, it would help with creating a cleaner, safer, and more sustainable game community.

Electric Manta is a studio founded by alumni of PopCap, a studio owned by EA, that was created last year. While they do not have an games that have been released yet, Electric Manta signed a long term publishing deal with French game publisher Voodoo on August 20th.

Electric Manta has announced that through its partnership with Voodoo it plans on developing what the company calls hybridcasual games, games which have the accessibility of hypercasual games, but the features and depth of midcore/casual games, thus increasing both accessibility, and LTV of their games.