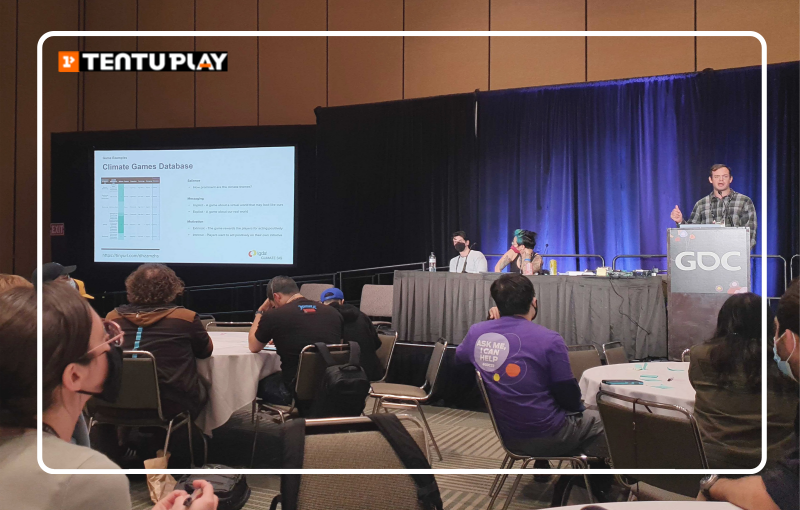 Part 1 of this GDC Review series covered the events at GDC and the topics that were discussed. This post focuses on the climate crisis workshop, which left on me quite an impression.

Use Your Game Developer Superpowers to Fight the Climate Crisis Workshop

This full-day workshop, organized as part of the Summit Session, was held from 10:30 a.m. to 6:30 p.m. on March 21. The workshop was comprised of lectures and team assignments that looked at how the climate crisis can be effectively integrated into games. At first, I hesitated to attend due to the lengthy schedule, but decided to go for it as TentuPlay (Sentience, Inc.) is also developing a game that addresses climate change.

The workshop was conducted by five speakers and four mentors. Grant Shonkwiler (Commander & Shonk, Shonkventures) first introduced the background and the Adrienne Arsht-Rockefeller Foundation Resilience Center (AARFRC), the host of the workshop. AARFRC, a center established to build resilience against climate change, is working on utilizing games to teach and encourage climate change response among players. 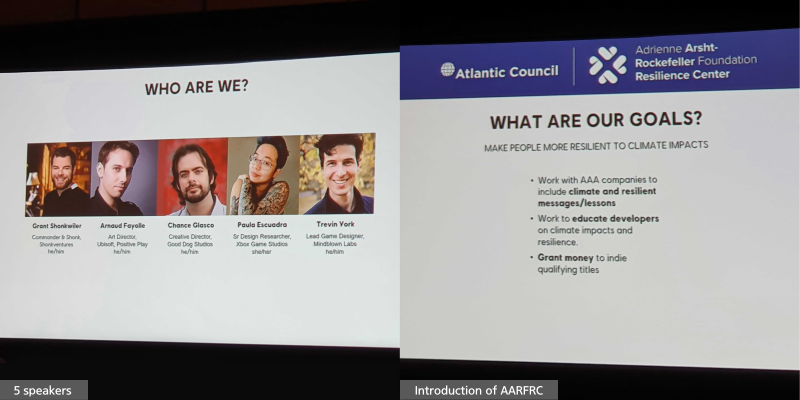 The climate crisis has various impacts on the world. Since it is not possible to address all aspects of the crisis in games, the first step is to choose a primary area of focus. The risks and impacts of the climate crisis are presented in the table. Each team was given time to choose a risk and game genre. The table I sat at chose Migration and decided on a hyper-casual game to attract more players.

The next lecture was given by Ubisoft’s art director Arnaud Fayolle, and each team began to propose gaming ideas under the theme of the climate crisis. The message of climate resilience can be conveyed to players in four aspects: aesthetic, tech, gameplay, and story. These aspects can be broken down into the eight elements listed below.

Team members proposed ideas for games containing the eight elements, and the ideas were grouped according to impact and implementability. Inspired by Mini Metro, I suggested a game in which players help animals to safely migrate and escape the climate crisis. My idea was not selected as it was not considered a hyper-casual game.

Some examples of games conveying messages on climate change were presented in the third session, conducted by Chance Glasco, the creative director of Good Dog Studios. The games were analyzed in terms of salience, implicit and explicit messaging, and extrinsic and intrinsic motivation. Among the games introduced was Garden Story, which received the Climate Resilience Grant from AAAFRC. 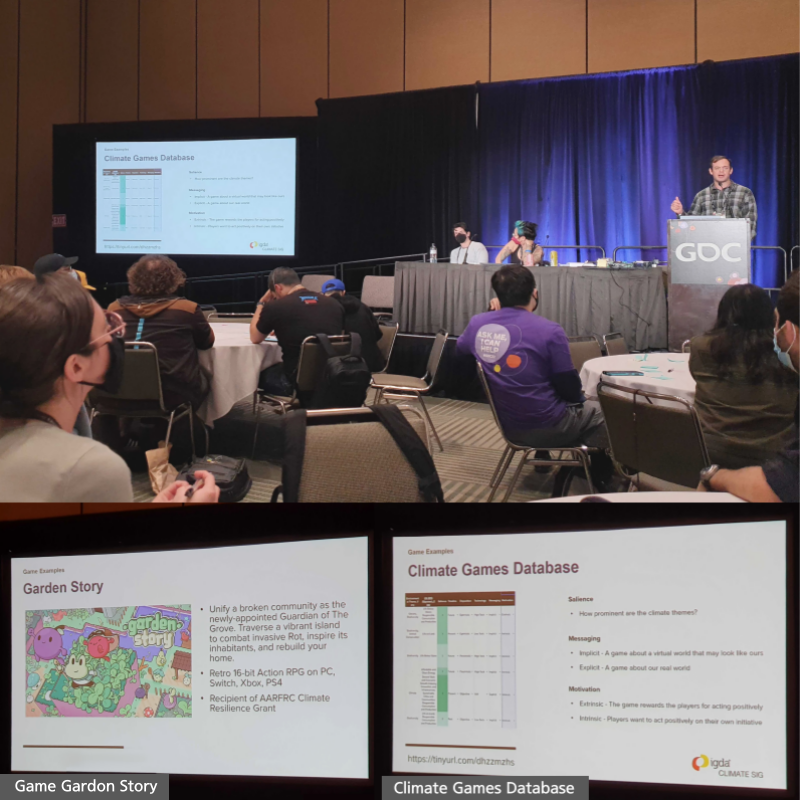 The fourth session was by Paula Escuadra, the senior design researcher at Xbox Games Studios. She went over factors to be considered in game design, such as the prior knowledge of players, understanding of core gameplay elements, experience of players, and game appreciation. The same factors mut be considered in the design of games that integrate climate change and resilience.

You will expect players to take action and play their part in improving the environment after experiencing games that encourage them to act on climate change. However, there are many steps to go through before an actual systemic change.

Our team did some brainstorming on the elements that can be added for players to contribute to changes in the real world. This was more challenging than expected. During our brainstorming session, quite a few of us mentioned a tree-planting game. I recalled Tree Planet, a game developed by a Korean startup but was discontinued in 2017. The company still engages in other activities to promote tree-planting. When users planted trees in the game Tree Planet, real trees were planted. They even received photos of the actual trees, which improved self-efficacy while prompting action.

Unfortunately, I had to attend another meeting and missed out on the fifth session by Trevin York (Lead Game Designer, Mindblown Labs). (If you have, please share your experience or leave a link to your post in the comments!)

The full-day workshop was an opportunity to develop my own ideas, exchange opinions with others, get feedback, and design a game that motivates users to take action. All in all, it was a valuable learning experience.

The workshop was highly relevant to TentuPlay’s upcoming game on the climate crisis. I was able to reflect on how the game can be improved to better convey our message while staying fun at the same time.

I hope you are just as excited as I am to see how TentuPlay integrates the climate crisis. 🐧
The next post will be the last of this GDC series.